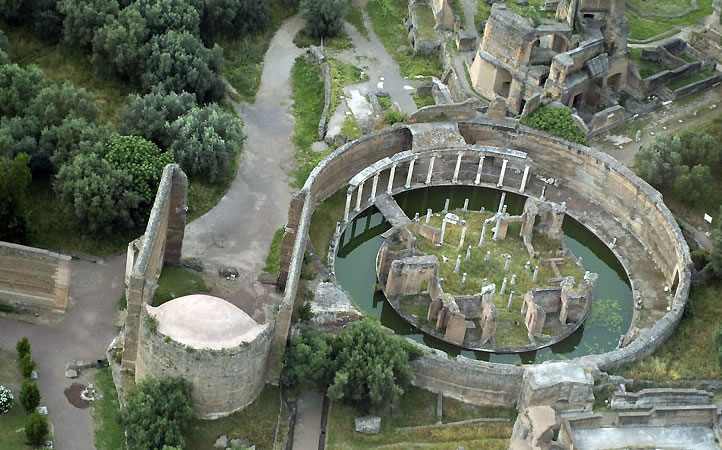 his day excursion is designed for those who wish to enjoy the best known Roman surroundings.
TIVOLI and the HADRIAN’S VILLA and VILLA D’ESTE between the visit of the two Villa’s we arrange a quickly break for a lunch in a nice place in Tivoli town.

Your English speaking driver-guide will meet you at your hotel then you will depart to Tivoli, about 40 minutes drive northeast of Rome.the first stop is in
Hadrian’s Villa, Italian Villa Adriana,  country residence built (c. 125–134 ce) at Tivoli near Rome by the emperor Hadrian.

This villa is considered the epitome in architecture of the opulence and elegance of the Roman world. Covering approximately 7 square miles (18 square km), the complex was more an imperial garden city than a traditional villa. Its buildings were designed to follow the natural lay of the land and included baths and bath buildings, libraries, sculpture gardens, theatres, alfresco dining halls, pavilions, and private suites. Significant portions of the complex have survived to modern times. Hadrian’s Villa was designated a UNESCO World Heritage site in 1999. It was proclaimed “a masterpiece that uniquely brings together the highest expressions of the material cultures of the Mediterranean world.”

Between the visit of the two Villa’s we arrange a quickly break for a lunch in a nice place in Tivoli town.

Villa d’Este, estate in Tivoli, near Rome, with buildings, fountains, and terraced gardens designed (1550) by the Mannerist architect Pirro Ligorio for the governor Cardinal Ippolito II d’Este. Before being confiscated as his residence, the property had been a Benedictine convent. Ligorio, who was also an archaeologist, conducted a close examination of the terraced site at the temple complex of Praeneste (now Palestrina) as well as excavations at Hadrian’s Villa at Tivoli. His discoveries at these nearby sites influenced his design of (and, in the case of Hadrian’s Villa, supplied the statuary for) the cardinal’s garden. The composer Franz Liszt occupied the top floor of the Villa d’Este from 1865 until his death in 1886. Today the villa itself is less noteworthy than the spacious park and the magnificent fountains, which are supplied with water by two canals dug especially for the purpose.

Entrances fees to both Villa Hadrian and Villa D’Este are approximately € 12 ,00 p.p.

The rates of the services includes use of luxury vehicles, english speaking driver ,highway and consumption feeds, , to and from your hotel in Rome. Lunch, or entrance fees to the sites are not included.