Tour Ancient Rome and Vatican City for 8 hours, including a visit to the Vatican Museums and the Sistine Chapel.

This Full-day trip is designed for those who wish to enjoy all of the  highlights of ROME in one day!
After you are greeted by your english speaking driver at your hotel, you will make your way to the historical center of the town to discover all the places described  below!
It is important to note that proper attire must be worn in the Vatican: shoulders and knees must be covered.
The Vatican Museums and Sistine Chapel are closed on Sundays with the exception of the last Sunday of every month.


This sightseeing of Rome is a superb introductory tour of Rome, ideal for roman history lovers .This tour takes you to the most important tourist sight in the centre of Rome to  feel the real ancient roman atmosphere Trevi Fountain,   A fountain in the Trevi district in Rome, Italy.

Standing 26.3 meters (86 ft) high and 49.15 meters (161.3 ft) wide, it is the largest Baroque fountain in the city and one of the most famous fountains in the world. A traditional legend holds that if visitors throw a coin into the fountain, they are ensured a return to Rome and we hope with us !! after we can move to 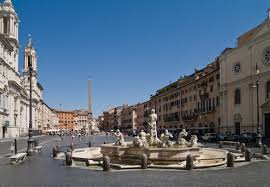 -Navona  Square ,With its ornate fountains, baroque palazzi and colourful cast of street artists, hawkers and tourists, Piazza Navona is Rome’s most celebrated square. Built over the ruins of the 1st-century Stadio di Domiziano (Domitian’s Stadium), it is centred on Bernini’s showy Fontana dei Quattro Fiumi (Fountain of the Four Rivers), representing the rivers Nile, Ganges, Danube and Plate.

For almost 300 years from the time it was paved over in the 15th century, the piazza was home to Rome's main market. And while the market traders have long since gone the crowds continue to come to bask in its baroque beauty.

Of the piazza's three fountains, Bernini's high-camp Fontana dei Quattro Fiumi dominates. Depicting personifications of four great rivers, it's festooned with a palm tree, lion and horse and topped by an obelisk. Legend has it that the figure of the Nile is shielding his eyes from the Chiesa di Sant'Agnese in Agone, designed by Bernini's bitter rival, Borromini. The truth, more boringly, is that Bernini completed his fountain two years before his contemporary started work on the facade and the gesture indicates that the source of the Nile was unknown at the time.

Close to Navona square we can arrive in few minutes by car to the pantheon where after a quickly break to taste a really good roman “espresso”(cup of coffee short and strong)we finally arrive to the church. 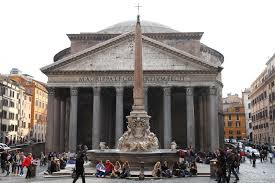 Pantheon is a magnificent ancient temple in Rome that was later converted into the church of Santa Maria ad Martyres. Dating from 125 AD, this is the most complete ancient building in Rome and one of the city's most spectacular  sights.

Until the 20th century, the Pantheon was the largest concrete structure in the world. Michelangelo studied its great dome before starting work on the dome of St. Peter's Basilica. 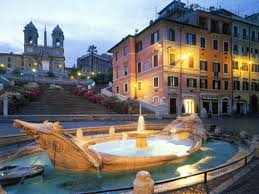 -Spanish Steps: the steps were built in 1723–26 by Francesco De Sanctis, not on behalf of the Spanish, but for the French as a grand entrée to their twin-towered church of Trinità dei Monti at the top. At the foot of the steps burbles the beloved Barcaccia ("Ugly Boat") fountain, a sinking and leaking marble boat sculpted by a teenage Bernini along with his father, Pietro Bernini . The less obvious, American connection to the Spanish Steps starts with the location of Rome's American Express office, a few doors south of the steps on the piazza  In 1985, crowds thronged the piazza to protest the opening of Italy's first McDonald's here.

For some people the Spanish Steps are something to look at, go "ooh!", snap a photograph, and move on. Others insist that, since it is a staircase, it must be climbed; that'll take maybe 20 minutes up and down. Still others enjoy the easygoing vibe and sit on the steps for a while (though, sadly, authorities no longer allow you to picnic here—even to lick an ice cream cone). If you take time to soak it all in, visiting the Keats House and everything.

Amphitheater
The Colosseum Emperor Vespasian, founder of the Flavian Dynasty, started construction of the Colosseum in 72 AD. It was completed in 80 AD, the year after Vespasian's death.
The huge amphitheater was built on the site of an artificial lake, part of Nero's huge park in the center of Rome which also included the Golden House (Domus Aurea) and the nearby Colossus statue. This giant statue of Nero gave the building its current name.

The elliptical building is immense, measuring 188m by 156m and reaching a height of more than 48 meters (159 ft). The magnificent structure was clad in marble and 160 larger-than-life statues graced the arches on the upper floors. Emperors used the Colosseum to entertain the public with free games. Those games were a symbol of prestige and power and they were a way for an emperor to increase his popularity.

The southern side of the Colosseum was felled by an earthquake in 847. Parts of the building - including the marble cladding - were later used for the construction of other landmark buildings such as the St. Peter's Basilica and Palazzo Farnese.
Befor to leave the Historical part of the town we can appreciate the overview of the

Roman Forum, Latin Forum Romanum,  most important forum in ancient Rome, situated on low ground between the Palatine and Capitoline hills. The Roman Forum was the scene of public meetings, lawcourts, and gladiatorial combats in republican times and was lined with shops and open-air markets. Under the empire, when it primarily became a centre for religious and secular spectacles and ceremonies, it was the site of many of the city’s most imposing temples and monuments. Among the structures surviving in whole or in part are the Temple of Castor and Pollux, the Temple of the Deified Caesar, the Mamertine Prison, the Curia (senate house), the Temple of Saturn, the Temple of Vesta, the Temple of Romulus, the Arch of Titus, the Arch of Septimius Severus, and the Cloaca Maxima. 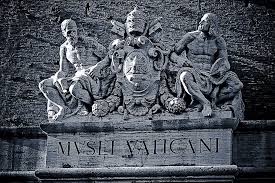 -The Vatican tour which includes the Museums, the Sistine Chapel and a tour of St. Peter’s Basilica is the most complete tour of the Vatican. You will visit the most wonderful collection of art in the Vatican Museums that houses on of the.most extensive collections in the world.
Once inside the Vatican walls we will cross the Pigna Courtyard which takes its name from the gigantic bronze pinecone placed in the middle, a work found at the Roman Baths of Agrippa.Then to the Gallery of Maps on of the most eye catching and attractive of the Vatican Museums. This gallery is a 120 metre long tunnel and includes a set of all the maps that represent and anticipate the unification of Italy, both geographic and spiritual.

The Sistine Chapel is a cultural and artistic treasure of the Vatican City, its known throughout the world for the conclave and other official ceremonies of the Pope's messages. The entire Sistine Chapel is a message of universal faith, the frescoes of Michelangelo Buonarroti, the "Last Judgement" is a unique work in the world where the artistic genius of Michelangelo expresses itself in all its majesty with a vision of the end of the world and the dramatic scene of man's destiny. 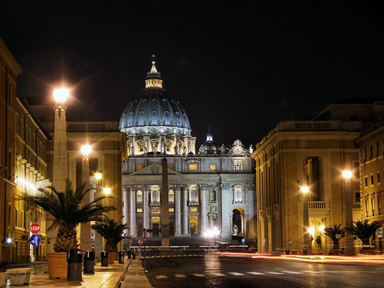 In St. Peter's Basilica we will see the dome of Michelangelo, Bernini's canopy, the bronze statue of St. Peter by Arnolfo di Cambio, the tomb of Blessed John Paul II (Karol Józef Wojtyla) placed under the altar of the chapel of St. Sebastian, the Pietà by Michelangelo another stunning masterpiece showing a  perfection of anatomical detail.

The tour will end in the fabulous Saint Peter's Square with its majestic colonnade designed by Bernini, a masterpiece of art and technique, proof of technical perfection lies in the two stone discs placed in the pavement of the square with the words "the centre of the colonnade" placing your feet on one of them, right or left depending on the case, one has the impression that the semicircle composed of four columns, is composed of a single row of columns
Now we are at the end of the tour but before coming back to your accommodation we want to show  Rome by the highest hill of the town
-Gianicolo Hill
This is known as the city of seven hills, but actually Rome has more than that. Indeed, the Gianicolo (or Janiculum), the hill that affords the best view of Rome, is west of the Tiber and outside the ancient city, so it's not counted among the ancient seven. Still, it's close to the historic center, just above the Vatican and the Trastevere neighborhood — and the panorama (not to mention the silence) from the top takes your breath away. At noon, the quiet is momentarily broken by the single shot of a cannon, to mark the exact time, a tradition that dates back to the 19th century.

The rates of the services includes:

We strongly recommend our private guides for the sites of the Vatican City in Rome.

Skip the queue and buy the tickets online!