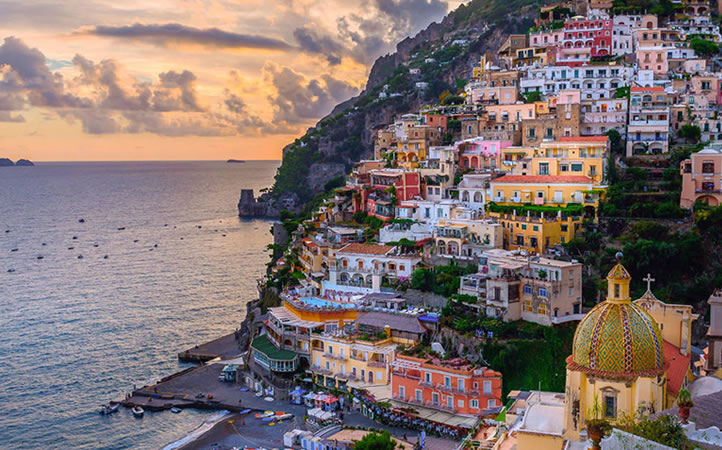 Enjoy a wonderful day in Pompeii, Sorrento and Amalfi Coast either as a Shore Excursion extended day trip from Rome.

On this  exciting day trip and shore excursion, you will enjoy a visit to the breathtaking seaside region of Campania and visit the ancient Roman city of Pompeii, savor the authentic flavors of Sorrento, and experience the beauty of the seaside town of Positano in the comfort of your own private deluxe vehicle driven by your personal English speaking driver who will help make your visit to Campania an unforgettable experience you will treasure for life.

We have combined together, so that they could be visited in a reasonable time with a day-trip not too stressful. The tour will start from the Rome We proceed out of the city, by the Highway to Pompeii for the visit of the excavations The city of Pompeii was an ancient Roman town-city near modern Naples in the Italian region of Campania, in the territory of the comune of Pompei. Pompeii, along with Herculaneum and many villas in the surrounding area, was mostly destroyed and buried under 4 to 6 m (13 to 20 ft) of ash and pumice in the eruption of Mount Vesuvius in 79 AD.

Researchers believe that the town was founded in the seventh or sixth century BC and was captured by the Romans in 80 BC. By the time of its destruction, 160 years later, its population was probably approximately 20,000, with a complex water system, an amphitheatre, gymnasium and a port.
The eruption was cataclysmic for the town. Evidence for the destruction originally came from a surviving letter by Pliny the Younger, who saw the eruption from a distance and described the death of his uncle Pliny the Elder, an admiral of the Roman fleet, who tried to rescue citizens. The site was lost for about 1500 years until its initial rediscovery in 1599 and broader rediscovery almost 150 years later by Spanish engineer Rocque Joaquin de Alcubierre in 1748.[1] The objects that lay beneath the city have been well preserved for centuries because of the lack of air and moisture. These artifacts provide an extraordinarily detailed insight into the life of a city during the Pax Romana. During the excavation, plaster was used to fill in the voids between the ash layers that once held human bodies. This allowed one to see the exact position the person was in when he or she died.
Pompeii has been a tourist destination for over 250 years. Today it has UNESCO World Heritage Site status and is one of the most popular tourist attractions of Italy, with approximately 2.5 million visitors every year.
Then by the panoramic Sorrentine  coastline of unrivalled beauty, on the northern slope of the Sorrentine Peninsula, in a sheltered spot, surrounded by luxuriant hills where vines, olives and above all high quality citrus fruits are grown. We entrance in Sorrento town.
Sorrento (Neapolitan: Surriento) is a small town in Campania, southern Italy, with some 16,500 inhabitants. It is a popular tourist destination which can be reached easily from Naples and Pompeii, as it lies at the south-eastern end of the Circumvesuviana rail line. The town overlooks the Bay of Naples as the key place of the Sorrentine Peninsula, and many viewpoints allow sight of Naples itself, Vesuvius and the Isle of Capri.
The Amalfi Drive (connecting Sorrento and Amalfi) is a narrow road that threads along the high cliffs above the Tyrrhenian Sea.
Ferry boats and hydrofoils provide services to Naples, Amalfi, Positano, Capri and Ischia. Sorrento's sea cliffs and luxury hotels have attracted notable people, including Enrico Caruso and Luciano Pavarotti.
Sorrento is famous for the production of limoncello, a digestif made from lemon rinds, alcohol, water and sugar. Other agricultural production includes citrus fruit, wine, nuts and olives. Wood craftsmanship is also developed. 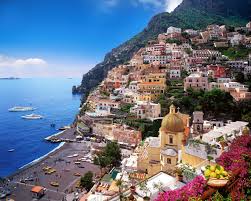 After a walk around the narrow streets of the center of the town we will pass up the mountain to the other side of the peninsula on the Amalfi drive, till the town of Positano.
Positano is a small picturesque town with splendid coastal views, on the famous Amalfi Coast in Campania, Italy. The town itself is perched on an enclave on the face of a hill and winds down towards the waters of the Amalfi Coast. Naturally beautiful, Positano attracts thousands of visitors every year. All year long, the town is always full of people, but if you are planning to visit Positano, it would be best to schedule your trip during the spring season.

Rates include the use of our luxury vehicles, English speaking driver  highway and consumption feeds, to and from your hotel in Rome.