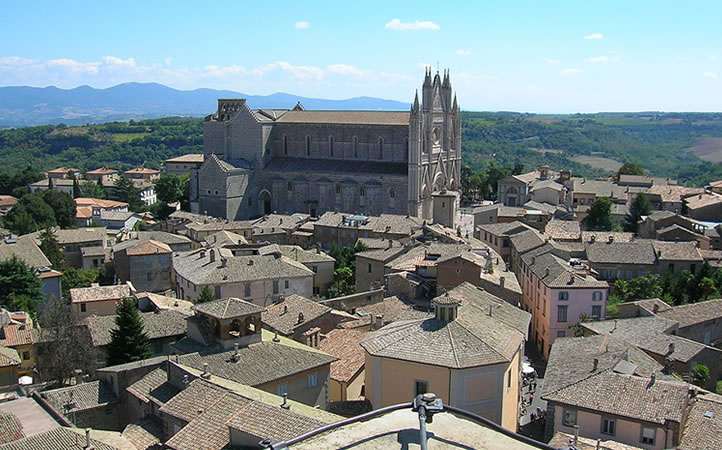 Enjoy a wonderful day in the Umbria to discover the taste and flavor of the region where the treasures of historical building and unforgettable towns gives the exactly feedback of the italian’s lifestyle in countryside.

Umbria is called the "green hearth of Italy" and tourists in Rome or by Civitavecchia Port  can easily spend a day visiting it. Our English speaking driver will take you from Rome or under the Ship in the port  to Orvieto, The town is situated atop an isolated rock 640 feet (195 m) above the junction of the Paglia and Chiana rivers. An Etruscan and later a Roman city (in late Roman times it was called Urbs Vetus, from which its Italian name is derived), Orvieto was the seat of a Lombard duchy and of a Tuscan countship before becoming an independent commune in the 12th century.

After much civil conflict and strife with neighbouring cities, the town passed under the dominion of the papacy in 1448Orvieto’s Gothic cathedral, which is one of the most celebrated in Italy, was begun in 1290 to commemorate the miracle at Bolsena, a town situated just to the southwest, where in 1263 a priest witnessed the miraculous appearance of drops of blood on a Host that he was consecrating; a large silver shrine in the Cappella (chapel) del Corporale contains the Holy Corporal (linen altar cloth) from Bolsena. The cathedral’s west facade, a fine polychrome monument of richly sculptured marble, is divided into three gables with intervening pinnacles. The interior of the building is richly decorated with the work of a number of medieval sculptors and painters, notably the frescoes by Luca Signorelli and Fra Angelico in the Cappella Nuova. Many 16th-century sculptures adorn the cathedral, which was completed in 1580 Orvieto is an agricultural centre noted for its white wines, especially a traditional delicate, semisweet variety aged in tufa cliffs and a more recent dry variety. The town’s handicraft industries produce wrought iron, ceramics, and lace.

After the visit to Orvieto our driver will take you to Assisi, on Mount Subasio, in the province of Perugia. . The town lies 12 miles (19 km) east of Perugia and is famous as the birthplace of St. Francis, the founder of the Franciscan order. Assisi is situated on a spur of Monte Subasio at an elevation of 1,300 feet (400 metres) and overlooks the valleys of the Topino and Chiascio rivers. The town has narrow, winding streets and is surrounded by medieval walls. It developed from the Umbrian, Etruscan, and Roman town of Assisium, of which the temple of Minerva (now a church) is the most notable survival. Subject to the dukes of Spoleto in the early Middle Ages, Assisi became an independent commune in the 12th century and was involved in internal disputes and wars with Perugia before passing to the Papal States in the 16th century. It became part of the Italian kingdom in 1860. St. Francis was born in Assisi in 1182 and died there in 1226. Leaving Assisi at about 5:00pm and back to Rome or in Civitavecchia Port.

Rates include the use of our luxury vehicles, English speaking driver  highway and consumption feeds, to and from your hotel in Rome.
Lunch, or entrance fees to the sites are not included.
It is important to note that proper attire must be worn in the church shoulders and knees must be covered.